Andrew Burns Colwill was born in Clifton, Bristol and has led a colourful life which he has successfully portrayed on canvas although sadly much of his prodigious output remains uncatalogued.

His painting techniques developed out of utilising affordable materials and so untreated canvases, curtain linings stretched over wooden frames and household paint were the order of the day and have remained his preferred tools to this day. Unbeknownst to Andrew at the time, his ‘soak stain’ technique had its origins in abstract paintings as showcased by artists such as Jackson Pollock, Helen Frankenthaler and Morris Louis, but Andrew turned this generally imprecise technique into quite the reverse, creating contrast layers of subtle composition with skilfully detailed work.

Following an unruly childhood spent at the back of the classroom drawing and painting to keep him out of trouble, Andrew was able to put his artistic talents to use painting scenic artwork for the BBC, backdrops for theatre companies and murals around Bristol. By 1988, his growing self-confidence and reputation (together with money from commissions, friends and financial institutions) led him to hire Ashton Court Mansion for a spectacular exhibition of some of his largest works at that time. With over 1,000 visitors, all augured well for the future.

However, his increasing immersion in his work became fuelled by alcohol and drugs in a downward spiral of addiction. In an effort to break free, Andrew moved to Greece where he fought his demons and lived by selling art to tourists and locals from his makeshift gallery on a seafront.

Family ties eventually caused Andrew’s return to his beloved Bristol where he now continues to build a loyal following of collectors of his stunning work. 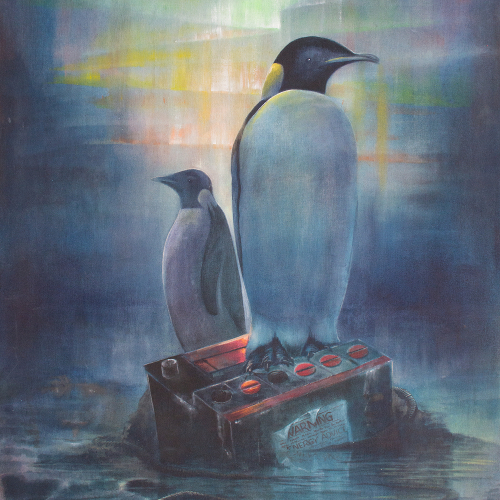 Click here  to read an interview with Steve Wright at Bristol 24/7.

Click here  for Auntie G’s blog on the artist.

Click here  for a write-up on the show in The Bristol Magazine.

Click here  for a write-up on the show in Bristol Living Magazine.