Alan started working with wood in the middle of the last century when he was eight years old, and sold his first piece – a simple swift in flight on an old piece of pine wood – for half a crown (that’s 12.5 pence in new money) shortly afterwards. From then on, his school friends could always track him down by following the trail of wood shavings from his constant whittling. As soon as he was old enough to drive he started attending fetes and markets where he sold his carvings to eager customers who admired the detail of his work.

As his name became known, Alan was invited to attend the larger shows including Royal shows and he became a popular interviewee with the media covering these events. Four of his pieces have been presented to members of the Royal family – Prince Charles if you’re reading this do you still have yours? Alan was nearly hired by Walt Disney to provide props for the film “The Black Hole” but it was decided that his media was not quite right for a spaceship.

Although Alan specialises in wild life art, his carving work has covered subjects such as building fronts and people and he has also undertaken commissions. His largest carving to date has been a full-size eagle with spread wings (wow – a wing is about 1 metre long!) while his smallest was a giraffe carved from a single matchstick. He has also created automated figures for steam organs, carved entire public house bars and made 3 chess sets complete with tables carved with coats-of-arms, all of which are now residing in Australia and New Zealand.

Alan told us that his son Nick finds him very annoying because he can paint, draw, engrave, carve and sculpt with such ease. Alan can work with metal, stone, glass and wood but his favourite is Yew wood because of the colour variations in the wood.

We are very fortunate to be able to have a number of his carved wood pieces in our gallery. 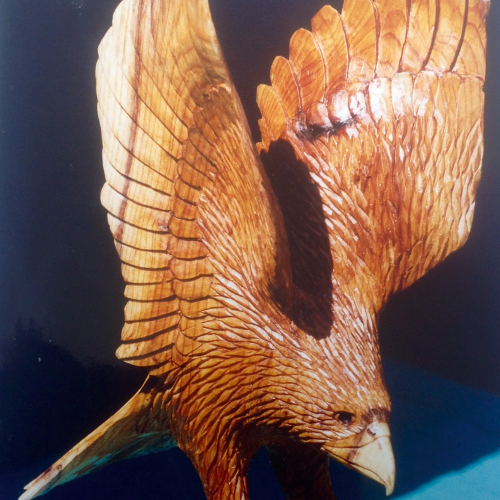 Email us (art(at)itsall2much(dot)com) if you’d like to know more about Alan Duncan.