Nick was born in 1966 in Barnstaple, Devon, a son to the late artist Peter Rasmussen. Of Danish descent, he has yet to visit the land of his forefathers.

Nick started out as an apprentice panel beater in 1986 where he learned his welding skills working on all sorts of vehicles from minis to Rolls Royces.

Always a car fanatic at heart, when work was quiet one day he retrieved some scrap metal from the skip and proceeded to make model replicas of classic cars.

It wasn’t until later when he moved to a village called Tollesbury in Essex, situated by the Blackwater estuary, that he was inspired to make boats and fish. His work was subsequently exhibited in Colchester. On moving to Pembrokeshire he exhibited in Tenby and St Davids.

Currently residing in Glastonbury, Nick hopes that his work becomes even more popular. There are encouraging signs that his hopes will be fulfilled as he has already had two of his ‘shark’ pieces snapped up at Dreweatts Urban and Contemporary Art auctions. 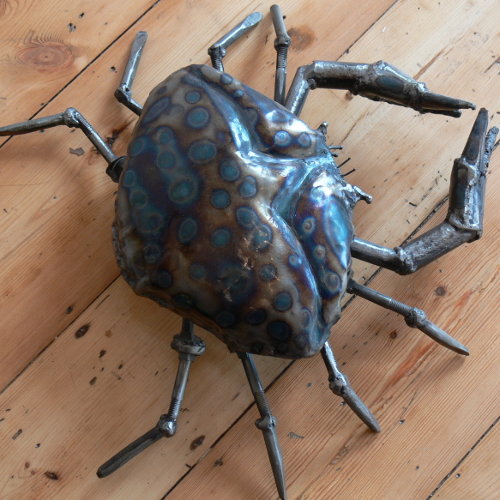 Email us (art(at)itsall2much(dot)com) if you’d like to know more about Nick Rasmussen.