Jed Rouncefield Franklin is a British artist who works with the influences of fashion, glamour and style, and specialises in portraiture and figurative based studies, but with a twist of street art infusion. His work is evocative of 60s fashion photography, inspired by David Bailey and the work of pop artists James Rosenquist and Richard Prince. He also draws on the urban art scene, in particular the use of stencil and aerosol graffiti.

Jed would class his work as ‘avant garde’ pop, showing edgy compositions and imagery mixed with traditional practice techniques. He has a natural talent for capturing the essence of the person he is painting and adds his unique style, the use of bold and often vivid colours, to create striking, memorable pieces. He aims to achieve more and express more than a simple photographic ‘snapshot’ in his composition, taking influence from photography but going further by introducing personality into his pieces.

”My paintings are usually of imagery that I find intriguing, challenging and sometimes harshly cropped as a composition. The face and especially the eyes of the sitter or model are very important as they can capture the mood of the painting. Resources come from a variety of sources; books, magazines and my own photographic work. They often have a quality similar to glossy photo imagery from magazines. I have been influenced heavily by fashion photography, studying 60s photographer David Bailey. I have also drawn influence from the American photo realist and Pop movements”. JRF

Jed has exhibited widely in the Bristol and North Somerset area including the RWA – Open exhibition and 2010 Contemporary painting exhibition – and also in London at the Brick Lane Gallery, at Gloss Gallery in Exeter and a number of national art fairs. He was also part of a digital showcase in Times Square New York on the billboards and has had work on show in New York at The See-Me exhibition space, Long Island. In addition, Jed is on the North Somerset Arts Committee. 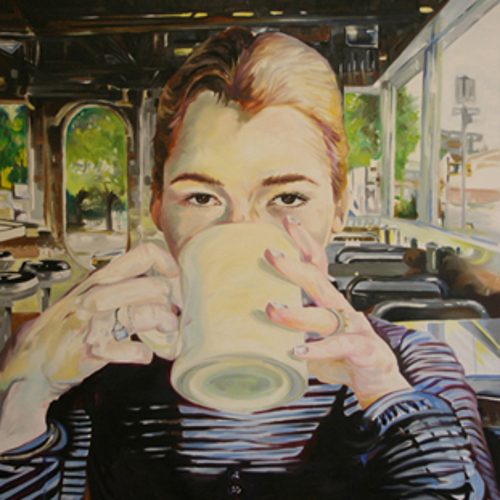 Email us (art(at)itsall2much(dot)com) if you’d like to know more about Jed Franklin.