Sulimo is a Bristol-based, self-taught illustrator working primarily in acrylic paint. His art reflects his desire to share with others visually his mental image of women as “strong, sexy and magically dangerous”.

Early influences were comic books and their illustrators, such as John Buscema, John Byrne and Neil Adams, particularly the latter because of the realism his style brought to the comic book format. Further exploration of the genre drew Sulimo to the works of Berni Wrightson, Barry Windsor-Smith and Frank Frazzetta, artists who were able to convey whole stories in a single picture. Sulimo’s ideal composite artist would be one who could produce a picture with “the detail of Smith, the atmosphere of Wrightson and the pathos and power of Frazzetta”. Since then, Alex Ross, Oliver Ledroit and Simon Bisley have been added to the list of artists admired by Sulimo.

However, it was in the 90s that Sulimo encountered his greatest single artistic influence; the Japanese illustrator Hajime Sorayama. He was inspired by the artist’s philosophy of ‘perfection in execution’ that set a new benchmark in technique. Up until this point, Sulimo had used acrylic base with pencil crayon for detail and tone – discovering Sorayama changed his approach and for several years Sulimo concentrated on improving his own execution by developing the technical skills needed to render a whole image in paint as realistically as possible.

A number of his works have been exhibited at Weapon of Choice in Bristol. Sulimo hopes to build on two further aspects of his work in the future; animation and fashion. 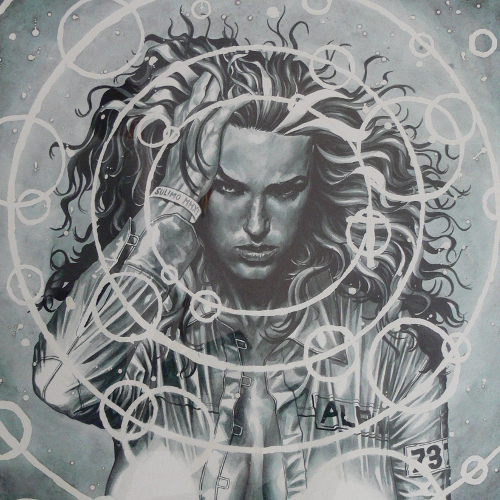 Email us (art(at)itsall2much(dot)com) if you’d like to know more about Sulimo.