Rich Simmons is an award-winning rising star in the British art scene. Rich’s work first exploded onto the commercial art scene with a street art piece celebrating the royal wedding of Prince William and Kate Middleton in 2011. The piece, entitled “Future ***King”, depicted the royal couple as Sid and Nancy of the Sex Pistols and captured the feelings of a nation in a fresh and witty manner. Images of the work reached a global audience within hours of its completion.

Rich went on to exhibit in several group shows at The Opera Gallery on New Bond Street and had a solo pop-up show as part of London Fashion Week. A successful sale at a Bonhams street art auction and a cover magazine feature about being the first street artist to go to Azerbaijan’s capital Baku rounded out a hugely successful 2011.

Rich’s artwork deconstructs objects and relationships that are dear to him. He compartmentalises items and subcultures, and celebrates their relationships. Involving the viewer in direct commentary, he juxtaposes their understanding of subject matter with his own, sometimes abrupt, opinions and sense of humour. His street art roots are reflected in his often elaborated detailed stencils. Experimentation and a prolific work ethic have helped to evolve Rich’s status as The Opera Gallery’s rising star. 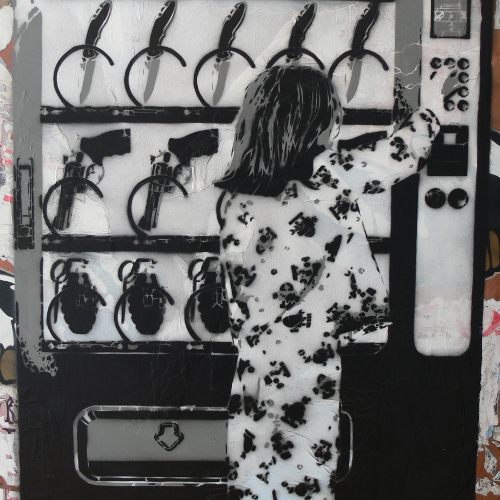 Email us (art(at)itsall2much(dot)com) if you’d like to know more about Rich Simmons.