Mark Lloyd BA MA (born 1971) is a British artist who works predominantly in painting; he was profiled on the Saatchi Gallery website as being part of the “New Sensations 2012”.

He is a passionate and enthusiastic artist who believes that being an artist is a political statement and that art is a means of inspiring others to self empowerment and self betterment.

In his early years he practiced as a graffiti artist (writing under the name of ‘ICON’) as a means of self expression, making art ‘in and on’ an urban street environment. He progressed into a formal art education and studied at Falmouth, The Slade and Winchester Art Schools in a diverse range of contemporary and traditional artistic techniques and methods. It is this combination of techniques that is reflected in his work today.

After graduating, he has continued to develop his practice and exhibits throughout the UK. Mark lectures in art and contextual studies at University level, is a curator, and has work in many private collections. However it is the making of art that remains his primary purpose.

In 2008 Mark won the NIACE European Adult Learner of the Year Award. More recently his work has received esteemed acclaim from such renowned artists as Stuart Semple, Ricardo Paniagua and Sir Anthony Caro OM CBE; it was the latter who stated in 2011 about his work that “these are the best drawings I have seen for years”.

In 2013 Lloyd exhibited with Sir Anthony Caro in a group show, and most recently Lloyd has had his work featured in the Independent Newspaper and has been short listed for the 2013 Griffin Art Prize. 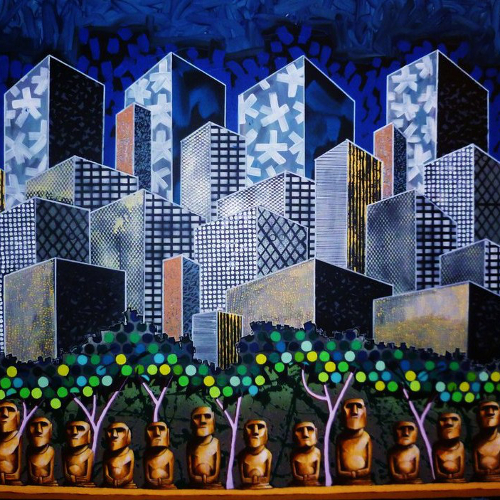 Email us (art(at)itsall2much(dot)com) if you’d like to know more about Mark Lloyd.