Dom Williams studied Fine Art at the University of Wales Institute, Cardiff (UWIC) and is currently based in Bristol. He is an eccentric and convivial person: a painter, sculptor, community artist, animator, illustrator and comic book author who focuses on emotion and story telling. He spends most of his time staring into space thinking of stuff to draw. Most recently he has been drawing stories to make people happy.

“Usually when animals become anthropomorphised they are generally given majestic, powerful or awesome qualities. My theory is that these animals would actually be more down-to-earth, having more everyday characteristics, being overwhelmingly joyful, frustrated or passive aggressive.” DW

Other things we know about Dom; he watches pro wrestling; he is a vegetarian; he also shoots film.

Dom is a member of “Cretin”, an artists collective working in Bristol and specialising in fantastic characters, monsters and bizarre creatures across a variety of mediums including painting, sculpture and illustration. His fellow Cretins are Loch Ness, SPZero76, Bill Giles and Paul Roberts. 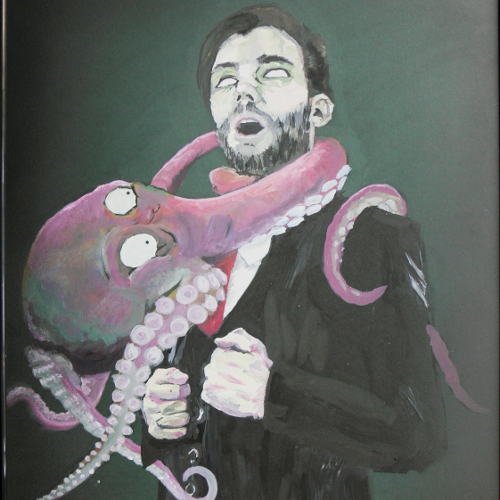 Email us (art(at)itsall2much(dot)com) if you’d like to know more about Dom Williams.