Rowdy’s artistic career was established in 1987 when he became an integral part of the Bristol graffiti scene, in which he remains instrumental to this day. His work appears throughout Europe and can be found in the most unlikely places, from underground rural settings to highly visible urban reaches.

Rowdy’s trademark crocodiles are often huge in scale and are indicative of the playful nature of the imagery in his work. The last few years have seen him collaborate with Cyclops and Sweet Toof resulting in one of the most widespread “bombing campaigns” seen in the UK’s capital in the last decade.

His cityscape paintings show skyscrapers constructed out of the tiniest marks a spraycan can make and take on a meditative quality which is in total contrast to the short sharp shock of his urban graffiti work. It shows an artist who has ultimately mastered the medium of the spraycan and takes his commercial work to another level.

Deeply politically motivated, his work is on permanent display in Spain, Italy, France and England in both public and private collections.

Rowdy has also been a member of NEON, a group of like-minded artists sharing a passion and a commitment, a belief in excellence, ambition and hard work. NEON is a quest for truth and for beauty and was formed in 2012 from a small group of artists from different disciplines but similar attitudes. Fellow members were Emma Caton, Jack Addis, Harry Simmonds, Marcus Lanyon, Ben Risk, Olivia Croce and Lucy Rogers. 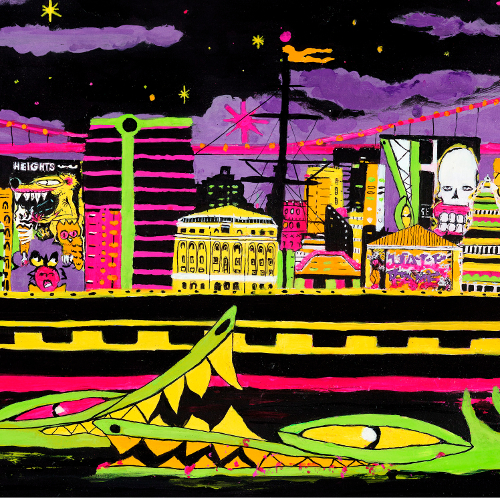 Email us (art(at)itsall2much(dot)com) if you’d like to know more about Rowdy.