SPZero76 is a versatile freelance illustrator and Street artist based in Bristol. Originally from South Yorkshire he moved to Bristol in 1996 where he received his degree in Illustration at the University of the West of England (UWE).

He has been working steadily as a freelancer for a number of years. Most recently he has worked alongside Mambo and Free Spirit, creating wall art in their stores. He has regular work creating signs, canvases and murals for bars, clubs, hairdressers and shops around the country, including promotional work with Red Bull.

Combining street art stylings with digital art techniques, SPZero76 creates a striking visual with a fresh contemporary edge. Heavy comic book influences can be seen in his work, which often portrays a fun moment in time captured for our amusement.

SPZero76 is a member of “Cretin”, an artists collective working in Bristol and specialising in fantastic characters, monsters and bizarre creatures across a variety of mediums including painting, sculpture and illustration. His fellow Cretins are Loch Ness, Dom Williams, Bill Giles and Paul Roberts. 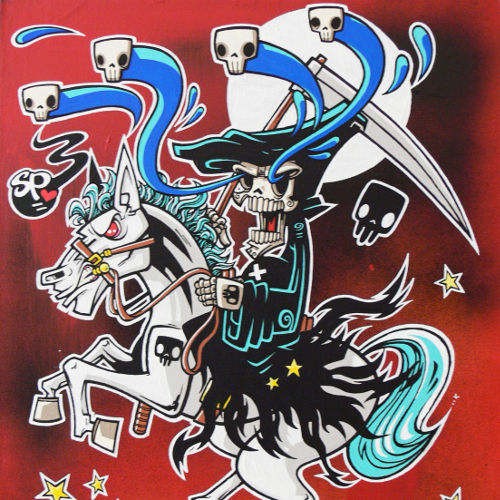 Email us (art(at)itsall2much(dot)com) if you’d like to know more about SPZero76.